Wind turbine failure models can help to understand the components’ degradation processes and enable the operators to anticipate upcoming failures. Usually, these models are based on the age of the systems or components. However, our research shows that the on-site weather conditions also affect the turbine failure behaviour significantly. At ANNEA we follow a novel approach for modelling wind turbine failures based on the environmental conditions to which they are exposed to. Taking into account the environmental conditions that are more likely to provoke component failures. This could enhance predictive maintenance models significantly.

It has been proven that not only the turbine age, but also certain combinations of weather conditions can affect their life-time negatively. During the useful life-time, the assumption of constant failure rates does not always hold true, especially when considering shorter time-intervals such as the failure occurrences on a monthly basis. There are significant variations in failure rates throughout the year that need to be taken into account by the wind farm operators. With this they can react properly to upcoming failure by initiating preventive or opportunistic maintenance actions.

The industrial research has proved that the failure behaviour of wind turbines and their components is strongly influenced by the meteorological conditions the systems are exposed to. Nonetheless, no models have been developed yet to directly describe the wind turbine’s failure behaviour based on combinations of external covariates.

In this article we describe a novel approach to model the failures of wind turbines during the useful life including the effect of environmental conditions. The model was applied to a 2 MW case study wind farm and the failures of the whole turbine system, as well as four main components. Failures are defined as events that can be associated to a component breakdown, which causes a wind turbine’s stop and needs intervention such as replacement or repair.

A regression model based on a generalised linear model (GLM) is applied to the data. The model is set up with a Poisson response distribution and a logarithmic link function. Subsequently, a ridge regression is employed to estimate the model parameters.

The model is applied to a case study including 30 turbines located in a wind farm in Spain. The wind turbines are geared, three bladed and pitch-regulated machines, with a rated capacity of 2MW each. The data set consists of failure logbooks, SCADA and meteorological tower (met-mast) data collected during three years of operation. The model covariates include the monthly average wind speed (WS) and turbulence intensity (TI), and the monthly maximum wind speed (MaxWs), measured at a height of 45 meters at the wind farm met-mast. Also included are the monthly mean relative humidity (RH), precipitation (Rain) and ambient temperature (Temp) taken from closely located weather stations. Additionally, as an indicator for the time operating at full capacity, the monthly mean power production (PWR) taken from the turbines SCADA systems divided by the rated capacity was chosen.

At the start of the data collection the turbines were five years old. An average wind farm year is modelled, whereas the observation period is introduced into the model by means of an exposure variable called model offset. Thus, the model outcome can be considered as the rate of failure occurrence in an average operational year.

In a first step the model is applied to the whole data base, without further distinguishing between the failed components. Subsequently, the failure data of four main components: the gearbox, generator, pitch and yaw system are extracted from the same set and the model is applied again. To analyse the importance of each input variable, the standardised model coefficients are compared. This is commonly done to interpret which of the covariates contributes the most to modelling the output and helps to see which weather conditions are important for modelling failures.

A summary of the model performance metrics for the five different cases is shown in the following table:

The R2 value ranges from 0 to 1 and shows the goodness of fit of the model to the data, where 1 indicates the best fit. It can be seen that in general the model performs well for all five failure classes. The models for the generator and pitch system, however, showed lower R2 and higher error values than the other ones. This indicates that for these two components additional covariates, which were not included in the model, could be of importance. This will be assessed in further studies.


The figure below shows the original failures (black) and the modelled data (green) for wind turbine system failures without distinguishing between their components. 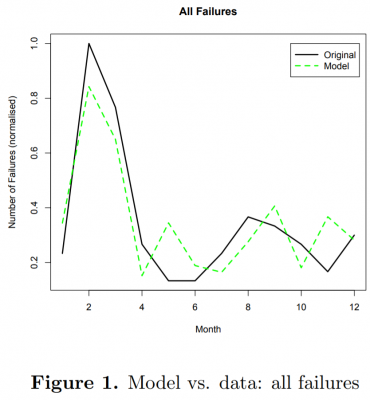 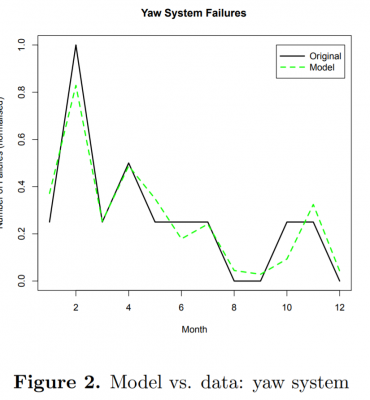 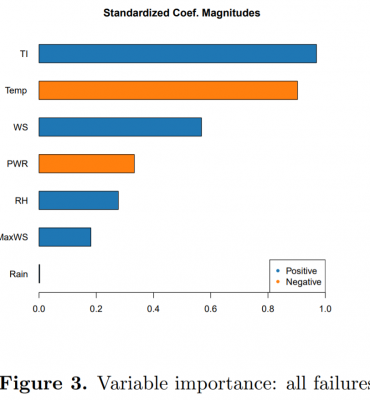